as i noted last issue i live in the 55th year cycle and interpret my mindset even in the 56th taking the measure of 260 kin before june24 as its mindconceptional moment ...

let me see for sure ... AHA i'm close but wrong in that perspective: it is octobre 7 , 1954 ... . So maybe the biological conception for a spirit to enter was building up for the receipt.

this number 55 gives rize to 11 and 5 being fractals of that product. And then there is still 19 and 20; 19 as the century marker and 20 as its century beholder/mapping.

And we refer to 19 as the frequency for Quran and MuhaMMed (is this Med referring either to medical governance or to mediation :-) And then there is MU too; which is where this sites Gimmick is from and it shows the 3 musceteers act showing 3 vertical waves that are token by a fourth one (as the open mind synchronizer).

In kweek set choreography those 3 are the 3 kweeks a moon and the 4th one is its ether which is shown at the FIREdaya which is the DôME - daya 28 as 0, zero and converter into another MooN. Tha DôME is in 17 days on octobre 17: Blue Solar Hand - this moons densed destiny affirmation : - in german language

I devote this German approach to my last visit to Berlin and address it to the Temple of Zeus in the Pergamon Museum; they also give tribute to the "return of the Götter" by giving focus on Dionysos. I even counted the steps of the Altar: 27 + 1 : 28th!

Isnt this about synchronizing quite some ages and inspiring the karmic cleanin by elegance as STAR088 (5 o's in 088!) promises.

Then on Tabel 13 current DNA codon meditated upon by Telektonon Players ... 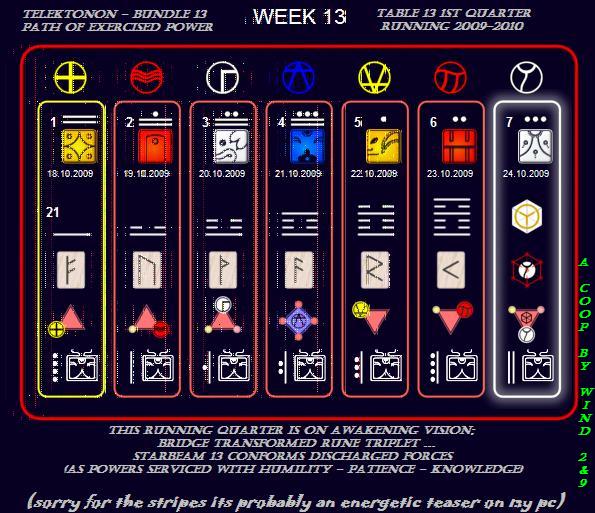