The Lifekweek is aligned to a sequential serial which starts at the bottom placed chakra ( about where the tail dropped off ;-) ...

Mark the akachique habit to start a voyage through the bodily centers by visiting the biovoid ~ 0 and meditative state of mind(set).

From bottom number 1 (given the numerical label in the whole series) it tracks by two (red/hot and blue/icy) "worms" to 2 ~ then up into 3 ~ up into 4 ~ up into 5 flowing into 6 and then "ending" up into "7" which feedsback in the overall centerpoint, the hara spot at the belly ... number 8 - as infinity marker for your sights.

This Life Twining Spiral is attached to the MoonToneSpice SPECTRAL in the DREAMSPELL map, which is set free for quite some time by now invoked by the Quetzalcoatl Universal Happening in 1987 (?)

It spirals in a sequential way as 9 daya a kweek do - mark the number of chakral points 0 - 8 => 9! and so that is synchrone to one another.

LET US LINE UP THE DAYA of this second week out of three (clicking the sound gives a narrative on its POPPING UP - out of PLASMA SEALS connected to Padmasambhava Prayers):

It might be obvious those sound were installed in the noosphere by deliraious acts in lovestrings.

The Spectral Tone brings us into the ages of perfection where producing is all in line with humankind at large (shared interests and ground for being human); its essence is liberation and is resonant to the Electric - 3rd - Tone of Service.

note
the 1st and 3rd week have other serials ... practising those exercises "blast your given memory sticks"

The Lovekweek is aligned to a spiral wave which starts at the top chakra (just 3 thumbs above the head) ...

From top number 7 (given the numerical label in the whole series) it ("phi") spirals to 1 then up into 6 down into 2 back up into 3 flowing into 4 and then back into "3" which by then is the hara spot at the belly ... number 8.

This Love Spiral is attached to the MoonToneSpice PLANETARY in the DREAMSPELL map, which is set free for quite some time by now invoked by the Quetzalcoatl Universal Happening in 1987 (?)

It spirals from the large environment into an intimate center where the heart gives a feedback into the hara and solar plexus aligned "self" and introspective mirror given to the temples functions.

LET US LINE UP THE DAYA of this first week out of three:

It might be obvious those sound were installed in the noosphere by deliraious acts in lovestrings.

note
the 2nd and 3rd week have other serials ... practising those exercises "blast your given memory sticks"

') moon 1 ~ kweek 2 ") ~ daya 1
") kweek 2 is the LIFEkweek which aligns to MoonTone SPECTRAL (intertwined fusing colours)
Posted by Unknown at 5:41 AM No comments: Links to this post

Last Weeks Waves came bye and weaved in aNother "mapping".

in my collaborative efforts with spirits i ~ S'ace gave free an image which needs some story lines (links will follow soon):

first the 3 kweeks addup to number 27 - which metaphorically is either the enter key or the space key considering the "standard of 26" as given base - while it is based on bio13: 2x13=26 (a)rhythmatick. 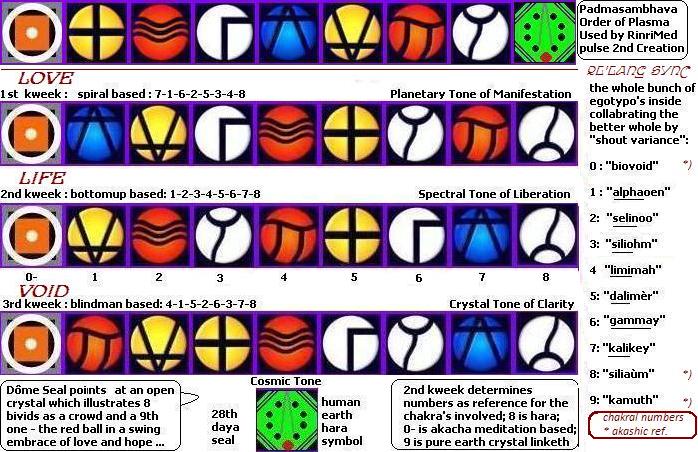 Shortly Said : we might agree upon the next interconnective labels for the 9 daya, the 3 kweeks and the DôME (still waiting for a responding effort by VV/PAN associates):

3 KWEEK
on a similar way we label the kweek as LOVEkweek ~ LIFEkweek ~ VOIDkweek ') ... and the typomap aligned - simply while it was the baring mother involved/evolved - resp. PLANETARY - SPECTRAL - CRYSTAL


1 DôME
is the ultimate daya interconnected to all 27 daya before and following (: ! :)
in words associated to "Daya of Moon Expierience" as well to any other Limerick that vibrates its intention at large ... the typomap links it to COSMIC

We agree upon the CosmicDôme (at lasT) ... which can also be referred at as GloryDaya: once every 28th daya on the whole planet where people live and interact in peaceful engagements.

the "ALPHAOEN" shout can be given SOUND similar as in the PHOENIX !
this sound simply lights up and clearifies the base chakra pulsar ...;
as all shouts are trustfull at the temple (your godgiven body as a vessel dying time and enlightening spheres) at charge ...

') at first contact here the label MOODkweek was given; however trilogues feedbacked a better label for this one - this because void is a blindmans orientation mode and fundamental state for "clearvoyance". VOIDkweek also resonates to the 1st daya of each kweek ... the "BIOVOID" sound which is always there in a timeless zône.

") then a similarity popped up in the stream of getting these newbees on this wire: 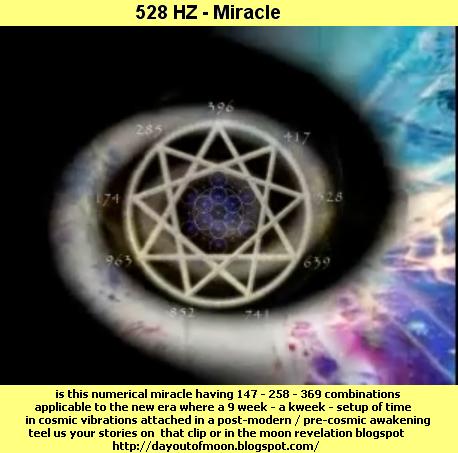 it can be watched over here on u-to-be

Another Reading Getting into the Roots of this Kweek Revelation is on RINRI & number 53.

what is its goal? : 54 ~ white lunar/challenging wizard
Posted by Unknown at 4:48 AM No comments: Links to this post